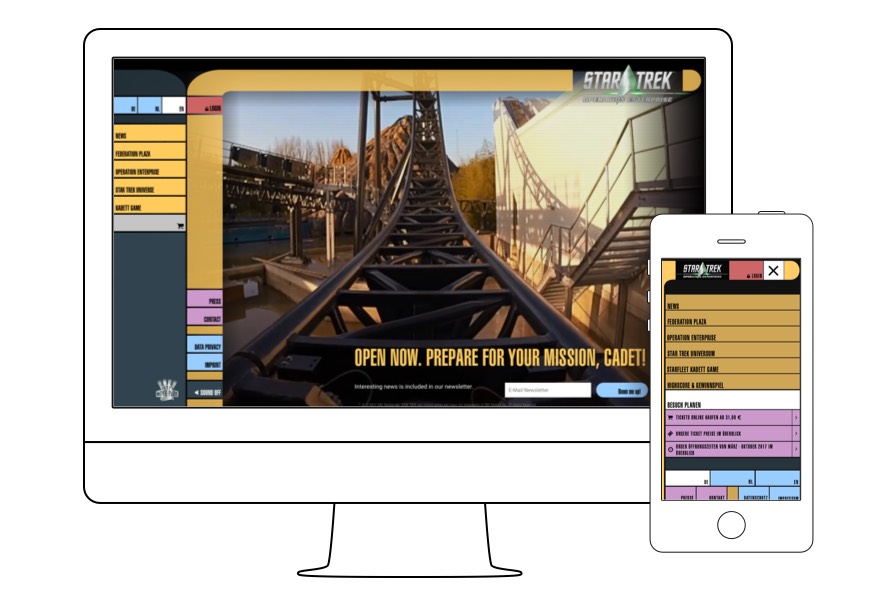 Movie Park Germany is one of our most loyal clients, who Miss Moss has been working with for over 10 years now. We always have fun together because we both share a passion for storytelling and this project was no different.

This season Movie Park Germany will be opening a complete new “STAR TREK” themed park section. The heart piece will be a new rollercoaster experience named “STAR TREK: Operation Enterprise”. If the visitor embarks for a ride on the rollercoaster he embarks on a mission as a Starfleet cadet to save the U.S.S. Enterprise from their nemesis: the Borg. We were assigned to create a responsive microsite for the new park section and rollercoaster. Our mission was to create an exciting experience for a very wide target group that ranged from Trekkies to the common theme park visitor, who might not even be interested in the Sci-Fi theme. This experience included the microsite but also the concept for the queue line.

1/4 One section of the website was dedicated to explaining the characters involved in the storyline of the new park area and the roller coaster.

The project started off with a meeting bringing together all team members, who were to be involved in the process: stakeholders of the park, copyrighting, development and us. In this first meeting we defined goals for the website, it’s mood and target groups. The meeting ended with a tour of the construction site, where the stakeholders explained the layout of the new park section, which helped create a shared vision of the experience the visitors could have. A rough concept paper, which recorded this shared vision was quickly agreed on and we got to work.

2/4 UX choreography can enhance the experience if it is part of a comprehensible story.

We developed an interaction and a visual design that could satisfy the common park visitor as well as the Trekkies with certain sections of the page catering to certain target groups. The visual design is based on the LCARS (computer interface) system seen in STAR TREK: The Next Generation and dedicated to the Trekkies. The visual design was one of the greatest obstacles of this project. We felt that it’s recognizability immediately aged the design and tried out various versions before realizing that in this specific project sound was the missing factor and very important when wanting to create a spaceship interface instead of a responsive website interface feeling. The sound design was crucial for the immersion of people who were familiar with the LCARS design. Luckily we could choose from a vast sound database provided by the rightsholder CBS. While the sound enriched the experience we had one more obstacle to tackle. We needed to find a solution to fit the space consuming style of the LCARS interface into a responsive screen design. Our solution for this was an animated menu, which would open and close, when hovering the menu bar.

This project allowed us to work on another important usability aspect that is often neglected: wording. Button, CTA and some of the – normally boring but important – information texts were optimized to fit the story. Our goal with the text was to encourage sharing & newsletter signups.

3/4 Focusing on detail can help to integrate even presumingly boring but necessary information (safety, age and height regulations for the ride) in your story. Call to actions that are within the storyline might help increase sharing.

The queue line of the new roller coaster attraction will be a special treat for Trekkie fans visiting the park (you will have to visit the park to find out more). But we also wanted to keep the other target groups entertained and more importantly use the time to give them a better understanding of the Star Trek universe. If you remember, the rollercoaster’s storyline is that the ride is the visitor’s final mission as cadets of the starfleet academy. The queue line, which they visit shortly before the ride, can be understood as their final written exam before leaving for their mission. The cadet exam is part of the responsive website. The visitor creates an account and is then guided through the process of designing his Starfleet cadet avatar, participating in the cadet exam and signing up for a raffle.

The Starfleet cadet avatar is the first step in which the visitor can decide (and learns about) the different types of life forms and jobs aboard the enterprise. It also helps them dive into a character that is within the STAR TREK universe. The game itself is a visit down memory lane for Trekkies and new information that encourages the common visitor to learn more about the story. It also helps all visitors find interesting spots within the new theme park section. When a visitor has finished completed a game he has the chance to show up in a high score list and sign up for the raffle. The whole process was planned mobile first because even though people at home could participate in the game it’s main use case would be on a mobile device directly in the park.

4/4 Leading the visitor through the sign-up process, the STAR TREK universe and the queue line and getting them ready for the triple launch coaster ride.

One last aspect we had to consider during the planning of the website is that the information architecture had to leave enough space so the theme area could grow into the site because the park is planning to “…boldly go, where no man has gone before” in the years to come. But that will be part of a future case study.

The project team had agreed that, when working on a STAR TREK project that plays during the Next Generation period of the saga, a visual design will be required that is based on the iconic LCARS system that can be seen in the series.
While it was one of the most exciting aspects of the project to be able to work on and with an iconic system it was also one of the most challenging aspects because it meant that we first had to understand the system before we could design for it. This might seem like an easy task because understanding the system you are designing for is daily business of a user experience designer but this was a very different case. There seemed to be no documentation of the interaction design logic or information architecture. Our research had to rely on a few fan-powered websites that had documented fractions of the LCARS system such as color coding and some UI elements. We also found hours of LCARS screen savers and simulations – also done by fans – on YouTube. So we watched hours and hours of various LCARS versions to try and figure out the interaction hierarchy behind it before realizing: this system is made for life-forms in the future, life-forms that have surpassed the status of “digital native”. The system also displays a content structure that is more comparable to the way a brain works. All very exciting but not very helpful if earthlings from today were to be able to navigate the system on their sometimes dated devices and with variable WIFI qualities.
We decided to base the visual design on the facts we could gather and created an interface that we hoped would not bring on the wrath of a very dedicated fan base as well as help the common earthling experience the new attraction and theme area and book their tickets.

We were able to work with an existing storyline packed with multiple characters and obstacles, which made the storytelling aspect of this project immensely fun. It was this much fun because we had Trekkies on every part of the team (stakeholders, development, copywriting, ux, design), meaning we had a shared vision of and understanding for the project right from the beginning. This encouraged us to continue not to only strongly recommend but insist on a discovery and research phase at the beginning of every single project we will take on in the future. Because the story can be so much more well rounded if you do!